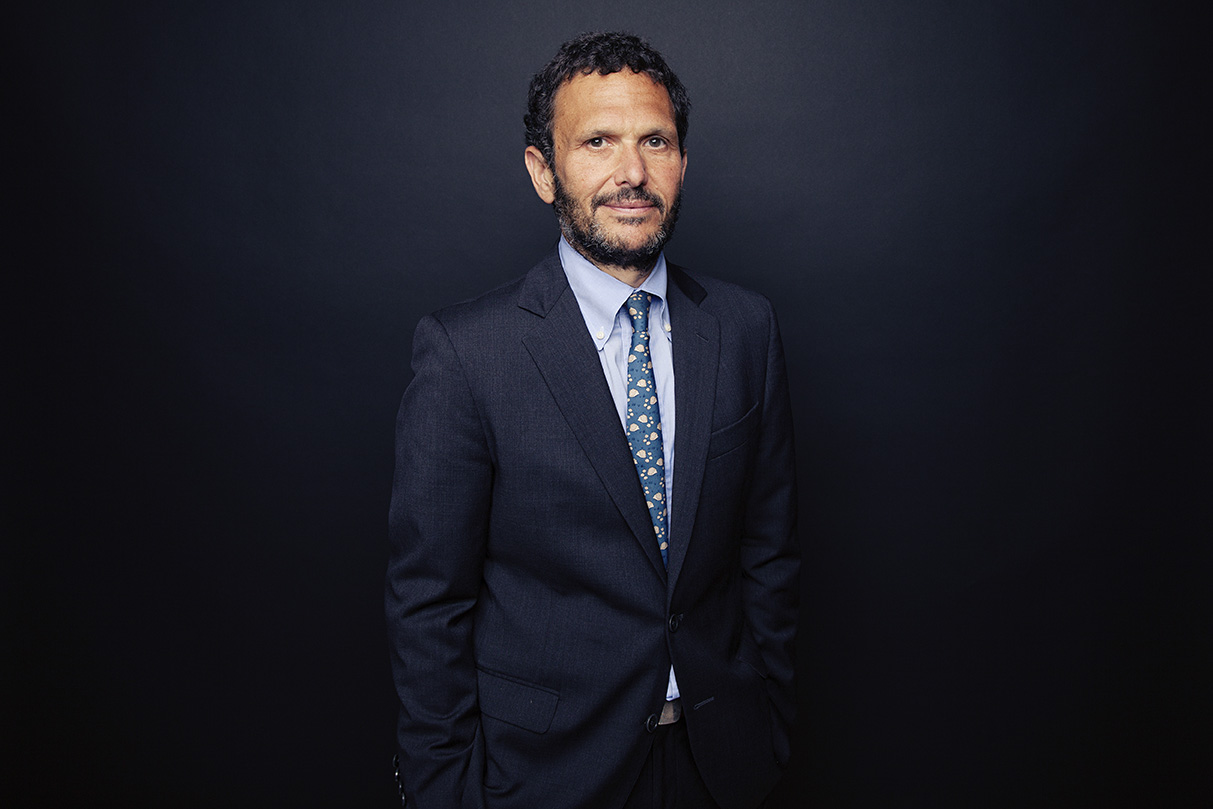 Ex-Investment Banker Mark Patricof Gets Some of the World’s Biggest Athletes Into Hot Private-Equity Deals. Here’s How He Built an A-List Client Roster That Includes Venus Williams and J.J. Watt

• Three years in, his firm already has a big win with an $800 million exit for Cholula Hot Sauce.

• Mark Patricof told Insider how he got an A-list roster that is a money manager's dream.

One of Mark Patricof's favorite parts of introducing professional athletes to the world of private equity is watching finance titans get starstruck when meeting stars.

"It's fun to see partners at KKR and Silver Lake and Carlyle interacting with Todd Gurley," Patricof said, referring to the star running back. "You watch for the first 15 minutes how nervous and shy these PE guys are, and it takes a while to ease into the conversations."

"They're not nervous talking to Elon Musk. But put them in a room with Blake Griffin and they turn to mush," Patricof continued, referring to the Brooklyn Nets player.

The ex-investment banker, who is known for advising Gawker on its $135 million sale to Univision in 2016, founded Patricof Co. in 2018. The firm advises athletes on how to coinvest in private-equity deals on a limited-partner basis. The client roster of 85 top-tier athletes includes tennis legend Venus Williams and Arizona Cardinals defensive end J.J. Watt. Athletes invest $500,000 to $750,000 per year on average.

Patricof Co. has access to 20 private-equity growth funds, including some run by L Catterton and Providence Equity Partners, and can get an allocation when the funds are seeking outside capital. This allocation is offered to the athletes, who can invest on a limited-partner basis without having to meet a minimum (typically $2 million to $5 million).

Patricof invests personally — in addition to the firm, which has a backstop of capital from JPMorgan — in every investment, including Bombas and TheRealReal. Patricof Co. receives 22% of the athletes' carried interest, or share of profits realized, he told Insider. Thirteen investments have been made thus far.

With too many dollars chasing too few deals, athletes' cachet gives the firm a competitive edge over other investors, Patricof said.

"There's a sort of magical allure of association with athletes. No one is going to admit that, but it's just true," he said.

But he is also insistent that they treat athletes like investors first, celebrities second.

"My biggest fear in life is if someone writes that we are an influencers fund or celebrity platform," Patricof said. "Athletes are just differentiated professional investors, and because we are able to aggregate them and create this team approach, we are getting to deals that are off-market and oversubscribed."

THE VIRTUES OF THE ATHLETE SHAREHOLDER

Patricof Co. is a natural culmination of interests for the 56-year-old Patricof. He grew up playing football and was a massive sports fan. "I like anything that has a ball or puck," he said.

After graduating from Emory University, Patricof worked at CAA, the famed agency for artists and athletes, for five years before going into the media business. In 2007, he went into finance, starting his own boutique entertainment and media investment bank, Mesa

In 2015, Patricof sold Mesa Securities to the global investment giant Houlihan Lokey. He spent three years at Houlihan as a managing director before he left to host a new streaming series for Verizon with Rob Gronkowski, the then-tight end for the New England Patriots.

On each episode of "Most Valued Partner," entrepreneurs would pitch to a panel of four athletes who would endorse their products if they liked the pitch. Over the show's 36-episode run, Patricof realized that athletes could bring more value as investors than endorsers.

"My thesis was that if you pay, for instance, Dwyane Wade $50,000 for three social-media posts, he'll do what he's paid for. But emotionally, if he were to write a $100,000 check to the company, while you might not be able to quantify what you're gonna get from him, he would lean in so much harder because he would understand that the outcome of that business would actually benefit him in lots of ways," Patricof said.

After the show wrapped, he shopped a pitch deck evangelizing the benefits of an athlete shareholder. In 2018, he launched Patricof Co. with one of his Mesa cofounders, Daniel Magliocco, and with the private-equity group of JPMorgan Asset Management as a backer. He brought on Matt Siegel, a former senior executive at Jay-Z's entertainment company Roc Nation, to manage athlete relations.

Patricof leaned on the friendships he made with athletes on the show, as well as on team owners he met during his time in finance, to recruit athletes. The first client to sign on was Cliff Avril, a defensive end for the Seattle Seahawks at the time. NBA superstars Dwyane Wade and Carmelo Anthony also came along in the firm's first year.

One of the biggest hurdles for Patricof Co. is explaining the virtues of investing in more mature but sometimes less sexy companies such as AEG Vision, an owner-operator of eyecare and optometry practices, over betting on young tech startups.

"The idea here is to get the athletes to understand what later-stage investing might look like in terms of building a portfolio, getting some wins, recycling the proceeds, and building that way versus taking these roulette-wheel shots with startups," Patricof said. "You can take eight to ten years to exit a seed investment. The beauty of the private-equity world is you cut that at least in half."

He said that while athletes now make headlines for VC and tech investing, this isn't necessarily the path to riches. For instance, former NBA star Junior Bridgeman has made more money from his fast-food empire than he ever did from playing professional basketball. Michael Jordan, the only former pro athlete to become a billionaire, has most of his fortune locked up in his stake in the Charlotte Hornets.

"The athletes who made money in the '70s and '80s weren't doing venture investing. They were investing in restaurant franchises or real estate, real businesses," Patricof said.

Athletes can choose whether to invest in each deal. "This is not a fund," Patricof said. One athlete turned down the hot-sauce company Cholula, which gave Patricof Co. its biggest exit to date, because he preferred Tabasco sauce.

Though Patricof espoused the virtue of the athlete shareholder, he made zero promises to portfolio companies on athlete involvement.

"We treat them like individuals, professional investors, not like celebrities," he said. "There is no guaranteed marketing relationship whatsoever."

C.J. McCollum, a Portland Trail Blazers player, told Insider that he appreciates that there is no commitment to endorse any investments as he prefers to "move in silence" when it comes to investing.

"Historically, most companies want you to vouch for them. They want you to put your name and your face alongside their company," he said. "I think they've done a great job of keeping certain athletes' personal stuff private, which is important, and continuing to help people kind of build their businesses in their investment portfolio behind the scenes."

That said, some athlete clients have gone the extra mile for their portfolio companies, and it has paid off. On Cinco de Mayo of last year, former Miami Heat stars Dwyane Wade and Victor Oladipo hosted Instagram Live cooking classes to raise money for struggling restaurants and brand awareness for Cholula. That November, the food giant McCormick bought Cholula for $800 million in cash. The return was just over three times investment, said Patricof.

'WE'LL NEVER RUN OUT OF ATHLETES'

The pandemic put some investments on pause, but Patricof Co. is running full steam ahead. It recently launched a real-estate vertical that pays quarterly dividends. The firm is also bringing on clients who are not athletes but high-net-worth people as part of its "PCO Club" — whose members pay annual membership fees for the same service of being introduced to private-equity investments. So far 30 clients have signed up, ranging from heart surgeons to executives at publicly traded companies to family offices. Further down the line is venture capital and raising a pool to backstop the athlete capital so the firm can get larger allocations.

"At the end of the day, if you're KKR and you're invited to do a deal, you don't really care whether Venus and J.J. write $100,000 check or a branded outgoing check. You just want them in the deal," Patricof said. "So we have that leverage of saying, 'If you want to then we want a larger allocation.'"

Scaling athlete capital is tricky while keeping the roster selective, he said, but the potential client pool gets bigger every year.