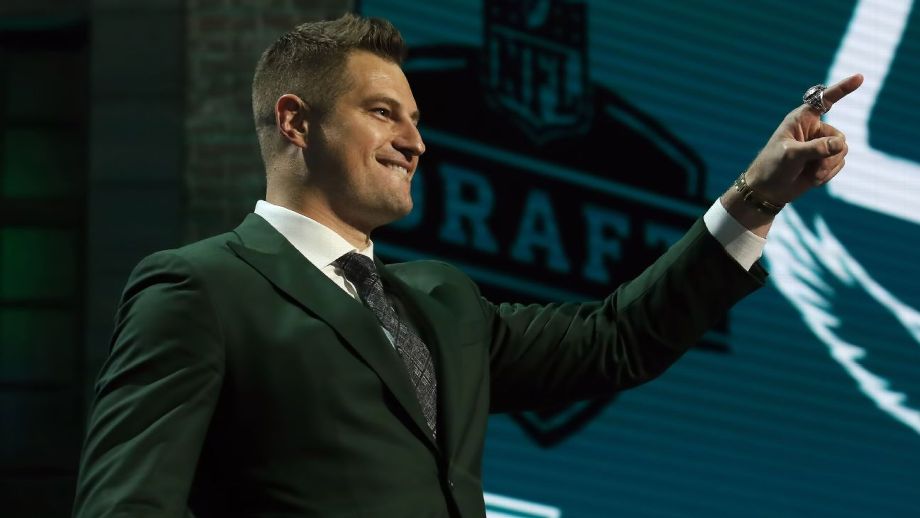 Early in his career, former Philadelphia Eagles tight end Brent Celek was the victim of a Ponzi scheme.

Like many young professional athletes, he knew little about navigating the murky waters of financial advisers, where sharks lay undetected looking to prey on newly-minted millionaires. He sought out a player he trusted in the locker room and went with his recommendation for a money guy, and it appeared at first to be a sound choice.

"I feel like, in a lot of ways, the NFL could do so much more in helping them," Celek said. "But you can't just sit there and say, 'Well, somebody else should help them.' If you want to help them, you should go help them yourself."

The story starts with Gronk, as most good ones do. Finance entrepreneur Mark Patricof was fresh off selling his successful boutique bank, MESA, and happily riding his earnout in 2017 when he was approached to co-host a Shark Tank-like show called "MVP" with Rob Gronkowski, where prominent athletes were pitched investment opportunities.

Through 36 episodes spanning two seasons, Patricof sat alongside the indefatigable Gronk and mingled with stars like Kevin Durant, Todd Gurley II and P.K. Subban. Hours of conversation in the green room before and after filming led Patricof to the realization there was a big void for professional athletes in the hard-to-crack private investment realm, where many a small fortune has gone to die.

"Here was an opportunity to get these guys out of these s---ty, early stage, dangerous deals, where they were losing money, then being called stupid or bad investors or being embarrassed in the press," Patricof said. "They just needed access to the right private deals, and then a system around that that would help build them up, not push them down."

Hence the creation of Patricof Co in 2018. Backed by J.P. Morgan, PCO has already invested more than $100 million, with players accounting for 30% of the funding. The company only takes a profit (22%) on investment gains. The combination of Patricof's track record in investment banking and the athletes' star power helps them access deals that might not otherwise be available to them individually. Instead of delving into fledgling start-ups, they target companies on "Floor 1x," as Patricof put it, to reduce risk. They have made 10 investments so far, including in Elon Musk's SpaceX and Top Golf, with a pair of exits in Cholula Hot Sauce and a luxury consignment company called The RealReal.

Sports Illustrated once estimated that 78% of NFL players are either bankrupt or under financial stress within two years of retirement and 60% of National Basketball Association players are broke within five years of leaving the sport. Bad investments play a role. One of the services PCO provides is to vet the proposals their athletes receive.

"Just somebody who can sift through all these deals [is big]," said Sabathia, who is among the prominent current and former athletes investing in Goalsetter, a financial literacy app for kids of all ages. "We get pitched so many different things, from your cousin's restaurant to somebody's aunt wants to open something else. ... It can be overwhelming.

"To be able to have Mark and those guys to be able to run those deals by, it's a great tool to have, for sure."

With the growth equity arm up and running, Patricof recently introduced a real estate vertical and tabbed Celek to serve as a liaison between the developers and athletes. Celek, 36, has this line of work in his blood: his grandfather built custom million-dollar homes, his uncles were carpenters, and his parents are entrepreneurs. He had multiple business ventures during his playing days in Philadelphia, including in the restaurant industry. After signing a bad lease, Celek vowed never to be on that end of the table again. His passion for real estate grew and kicked into high gear once he retired, and he soon created his own brokerage, mortgage and title company.

"I could tell that he had leveraged who he was in the city of Philadelphia -- a beloved, famous athlete in the market -- to create the right relationships and to build expertise in the real estate business," Patricof said. "Who better to partner with than someone who's a friend and who's invested his time and energy into learning the business.

The players' large platforms have been key to unlocking doors to quality opportunities. Their reach and brand equity holds value to companies looking for greater exposure. An athlete who is an investor rather than a sponsor is far more likely to go the extra mile to get the word out. Some companies are motivated enough to not only link up with PCO, but offer a better fee structure than they ordinarily would for investors.

That represents a sea of change, where some athletes have gone from being largely vulnerable to using their once untapped power to tip the business scales in their favor. And they have one of their own in Celek helping to lead the effort.

"This is a great way for me to give back to some of my teammates, guys I played with and guys that I played against, and just help these athletes preserve their wealth," Celek said. "Because they've done a lot of damage to their body. And I've learned that in retirement you've really got to take care of your body after you're done because we've taken a beating for so long.

"And if I had nothing to show for it, if I didn't have any money in the bank, or I had lost it all, I would be severely depressed. And so helping these guys preserve that does mean a lot to me."