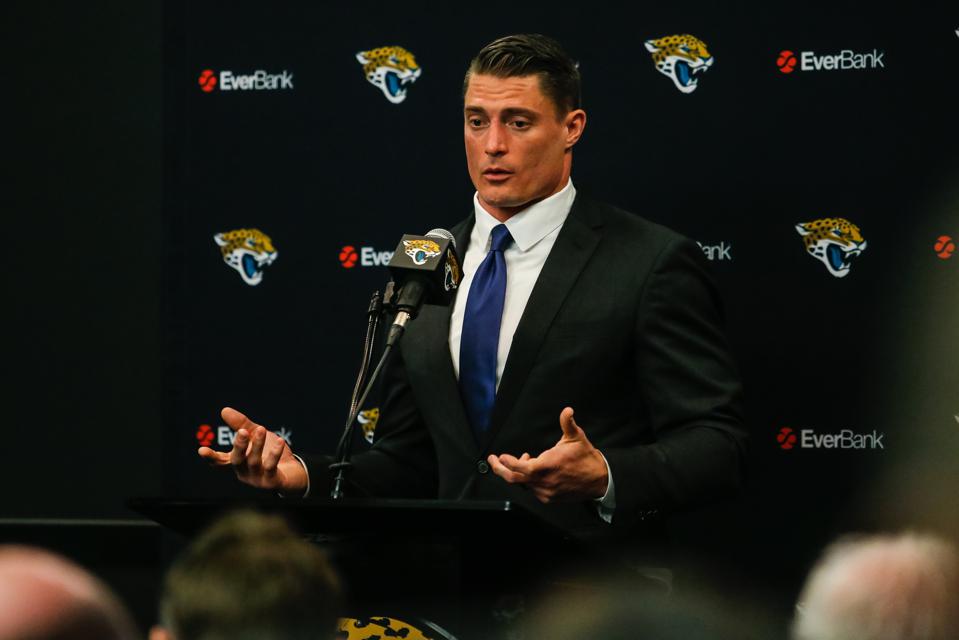 Paul Posluszny had a plan: play football for as long as he could, go to business school and get a job.

A second-round selection (No. 34 overall) in the 2007 NFL Draft, the former middle linebacker played 11 seasons with the Buffalo Bills and Jacksonville Jaguars before announcing his retirement in March 2018. While the Jaguars’ No. 2 all-time leading tackler is done chasing down ball carriers, Posluszny is currently in pursuit of his MBA from Carnegie Mellon University.

In anticipation of his May 2022 graduation, Posluszny has been going through the university’s career management services in search of internships and other opportunities as he prepares for his next step. But rather than starting out from square one, the 36-year-old father of three already has a decade of professional work experience under his belt, something he and other athletes are learning to embrace and harness as part of Patricof Co’s Career Development Services.

“Say you’re 30 years old, you’re done with your first career playing in the NFL or NBA and you say, ‘What do I do now?’” Posluszny said. “That is an extremely frightening situation to be in. I went through it. … Patricof is developing a program to help guys transition through that and learn about the skills we’ve acquired over a very different career in professional sports and how we can apply that and find purpose in a meaningful profession moving forward.

“The relationships they allow us to have access to is extremely powerful because it gives guys a chance to see what they’re capable of and how we can transfer all the skills we’ve acquired over a professional career in sports over into the business world.”

Founded in 2018 by investment banker and entrepreneur Mark Patricof, Patricof Co is a private investment platform that operates along twin paths as an advisory practice and an investment platform. Athletes receive financial advice gratis and are expected to invest approximately $500,000 annually toward private-equity deals.

Boasting 115 clients including Travis Kelce, Dwyane Wade, Henrik Lundqvist, Venus Williams, Kyrie Irving and Dak Prescott, Patricof Co launched its Career Development Services in late March. In partnership with executive coaches David Noble and Carol Kauffman from leadership and strategy consulting group View Advisors, the 4-6 month program helps athletes not only identify their off-field interests, but how to further their involvement in them, particularly from a financial perspective.

As part of the program and Patricof Co, athletes are introduced to CEOs and executives from various companies and organizations within their areas of interest while also benefiting from job-shadowing opportunities.

“The PCO Career Development Services program has been instrumental in helping me think through life outside of being an athlete,” said Phoenix Suns guard Langston Galloway. “The combination of Carol and David as coaches along with PCO’s on-the-ground intros is hugely impactful for me and different than any other opportunity I’ve come across.

“Through PCO I’ve already met a number of executives who work in the fashion space—these intros have been extremely helpful as I think through my own venture LG Kicks and further my development as an entrepreneur.”

According to the NFL Players’ Association, the average NFL career lasts just 3.3 years. Not only that, but 78% of players go broke within three years of retirement and 15.7% file for bankruptcy within 12 years of leaving the league, according to a report published by the National Bureau of Economic Research. That problem doesn’t just plague football. An estimated 60% of former NBA players go broke within five years of departing the league, and MLB players file for bankruptcy four times more than the average American.

“You can’t teach an athlete what I know in two weeks or two months,” Patricof said. “The goal is to empower them with the right relationships, right opportunities and vernacular to use to develop whatever muscles they have that apply to business. It’s more What Color is Your Parachute? type stuff than it is an education.

Throughout his decade-plus in the NFL, Posluszny witnessed players thrive and others barely survive off the gridiron. A finance major at Penn State University, he came into the league equipped with the knowledge of understanding the importance of being smart with your assets and financial decisions, which gave him a leg up on other players.

Posluszny is also well aware of the heartbreaking stories of former athletes featured on ESPN 30 for 30’s Broke and didn’t want to end up another statistic, especially with a wife and three children depending on him.

“Some of the guys we played with, you get a 20- or 21-year-old first-round draft pick who’s never opened up a bank account on their own before,” he said. “Those are some of the challenges we’re dealing with, so that’s one end of the spectrum, then we have other guys who went to Ivy League schools and know exactly what they’re doing.

“... You have an opportunity to make a significant sum of money in a short period of time, but then how do you invest that wisely so that you and your family are taken care of for the long term? That’s an ongoing problem.”

Not only is investing your money vital with professional playing careers limited, but identifying and determining where to do so is equally as important. Patricof recommends to clients that they take 5-20% of their net worth and invest it in alternatives by creating an allocation strategy that matches their interests and access.

Helping athletes identify those areas of interest is the focal point at the beginning of the Career Development Services. Once that’s established, athletes are introduced to CEOs, founders and executives in relevant industries to expand their network, hone their skills so they can fine tune what translates from the field/court to a given industry, and even benefit from mentorship opportunities.

While many athletes see the gaudy valuations and dollar signs coming from Silicon Valley, Patricof recommends they dominate their local markets where they play and live, rather than attempting to get in over their heads, at least initially.

“If you play for the Milwaukee Bucks, for example, there is not a deal that is taking place in that market you can’t have access to whether it’s a new real estate project, new cheese factory or whatever,” he said. “Your owner (Marc Lasry) is one of the most successful hedge fund guys on the planet, and in a city like Milwaukee there’s probably 15 billionaires who are all season ticket holders and suite holders. That ecosystem alone can make you tens of millions of dollars and create a real career for yourself in lots of interesting ways.”

The transition from professional athlete to next career is far from seamless. Athletes go from being part of a team and representing common goals of the men and women proudly putting on the same uniform or logo as you. When retirement hits, the team continues on without you.

Posluszny called it a “frightening process” and that “you feel this enormous void” once you’re no longer associated with your team or league. The important thing, he says, is surrounding yourself with the right people—a new team, if you will—in order to not only provide support, but also motivation as like-minded individuals striving towards a new goal.

“Being surrounded by outstanding people who are smart and willing to help you is an enormous advantage,” Posluszny said. “I’ve felt very fortunate to see enormous benefit and the impact of it. You’re approached by so many different people who don’t have your best interest at heart. You’re always getting pitched deals—car dealerships, gyms, restaurants, the whole gamut—so being able to have reliable people to fall back on and say, ‘Hey, what do you guys think of this?’ it’s been really, really powerful.

“For me, especially at this stage where you’re still trying to figure out where you’re going to be and you’re going through this transition but you still think about football every day, it’s awesome to have guys you can trust and rely on.”