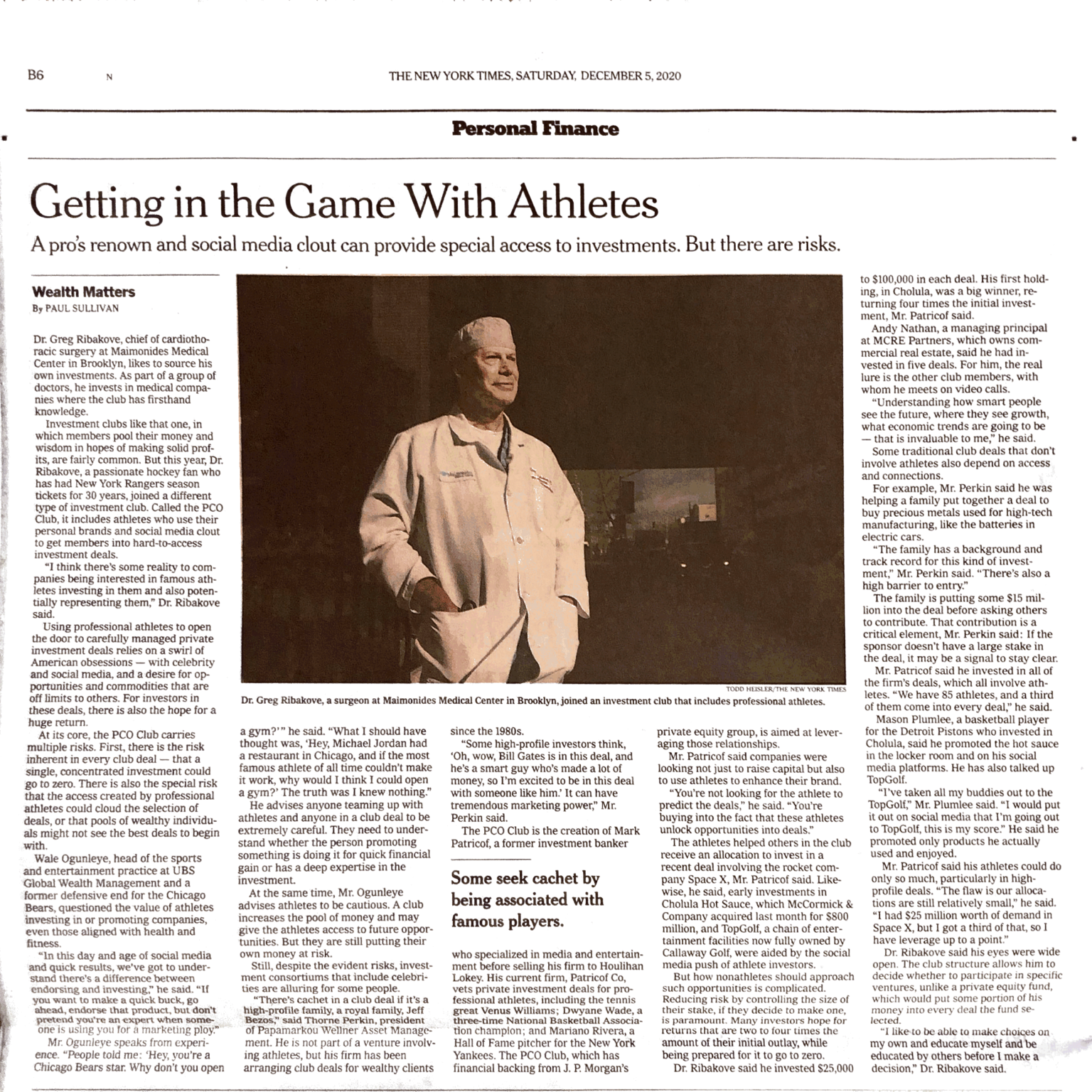 Invest Like a Pro (Athlete)? It Could Be Profitable, and Risky

With interest in private investments on the rise, getting into deals can take more than money. The cachet of pro athletes is one group’s way of differentiating itself.

Dr. Greg Ribakove, chief of cardiothoracic surgery at Maimonides Medical Center in Brooklyn, likes to source his own investments. As part of a group of doctors, he invests in medical companies where the club has firsthand knowledge.

Investment clubs like that one, in which members pool their money and wisdom in hopes of making solid profits, are fairly common. Butthis year, Dr. Ribakove, a passionate hockey fan who has had New York Rangers season tickets for 30 years, joined a different type of investment club. Called the PCO Club, it includes athletes who use their personal brands and social media clout to get members into hard-to-access investment deals.

“I think there’s some reality to companies being interested in famous athletes investing in them and also potentially representing them,” Dr. Ribakove said.

Using professional athletes to open the door to carefully managed private investment deals relies on a swirl of American obsessions - with celebrity, social media, and a desire for opportunities and commodities that are off limits to others. For investors in these deals, there is also the hope for a huge return.

At its core, the PCO Club carries multiple risks. First, there is the risk inherent in every club deal — that a single, concentrated investment could go to zero. There is also the special risk that the access created by professional athletes could cloud the selection of deals, or that pools of wealthy individuals might not see the best deals to begin with.

Wale Ogunleye, head of the sports and entertainment practice at UBS Global Wealth Management and a former defensive end for the Chicago Bears, questioned the value of athletes investing in or promoting companies, even those aligned with health and fitness.

“In this day and age of social media and quick results, we’ve got to understand there’s a difference between endorsing and investing,” he said. “If you want to make a quick buck, go ahead, endorse that product, but don’t pretend you’re an expert when someone is using you for a marketing ploy.”

Mr. Ogunleye speaks from experience. “People told me: ʻHey, you’re a Chicago Bears star. Why don’t you open a gym?’” he said. “What I should have thought was, ʻHey, Michael Jordan had a restaurant in Chicago, and if the most famous athlete of all time couldn’t make it work, why would I think I could open a gym?’ The truth was I knew nothing.”

He advises anyone teaming up with athletes and anyone in a club deal to be extremely careful. They need to understand whether the person promoting something is doing it for quick financial gain or has a deep expertise in the investment.

At the same time, Mr. Ogunleye advises athletes to be cautious. A club increases the pool of money and may give the athletes access to future opportunities. But they are still putting their own money at risk.

Still, despite the evident risks, for some people investment consortiums that include celebrities are alluring.

“There’s cachet in a club deal if it’s a high-profile family, a royal family, Jeff Bezos,” said Thorne Perkin, president of Papamarkou Wellner Asset Management. He is not part of a venture involving athletes, but his firm has been arranging club deals for well-heeled clients since the 1980s.

“Some high-profile investors think, ʻOh, wow, Bill Gates is in this deal, and he’s a smart guy who’s made a lot of money, so I’m excited to be in this deal with someone like him.’ It can have tremendous marketing power,” Mr. Perkin said.

The PCO Club is the creation of Mark Patricof, a former investment banker who specialized in media and entertainment before selling his firm to Houlihan Lokey. His current firm, Patricof Co, vets private investment deals for professional athletes, including the tennis great Venus Williams; Dwyane Wade, the three-time National Basketball Association champion; and Mariano Rivera, the Hall of Fame pitcher for the New York Yankees. The PCO Club, which has financial backing from J.P. Morgan’s private equity group, is aimed at leveraging those relationships.

Mr. Patricof said companies were looking not just to raise capital but also to use athletes to enhance their brand.

“You’re not looking for the athlete to predict the deals,” he said. “You’re buying into the fact that these athletes unlock opportunities into deals.”

The athletes helped others in the club receive an allocation to invest in a recent deal involving the rocket company Space X, Mr. Patricof said. Likewise, he said, early investments in Cholula Hot Sauce, which McCormick & Company acquired last month for $800 million, and TopGolf, the chain of entertainment facilities now fully owned by Callaway Golf, were aided by the social media push of athlete investors.

But how nonathletes should approach such opportunities is complicated. Reducing risk by controlling the size of their stake, if they decide to make one, is paramount. Many investors hope for returns that range from two to four times the amount of their initial outlay, while being prepared for it to go to zero.

Dr. Ribakov said he invested between $25,000 and $100,000 in each deal. His first holding, in Cholula, was a big winner, returning four times the initial investment, Mr. Patricof said.

Andy Nathan, a managing principal at MCRE Partners, which owns commercial real estate, said he had invested in five deals. For him, the real lure is the other club members, with whom he meets on Zoom.

“Understanding how smart people see the future, where they see growth, what economic trends are going to be — that is invaluable to me,” he said.

Some traditional club deals that don’t involve athletes also depend on access and connections.

For example, Mr. Perkin said he was helping a family put together a deal to buy precious metals used for high-tech manufacturing, like the batteries in ele ctric cars.

“The family has a background and track record for this kind of investment,” Mr. Perkin said. “There’s also a high barrier to entry.”

The family is putting some $15 million into the deal before asking others to contribute. That contribution is a critical element, Mr. Perkin said: If the sponsor doesn’t have a large stake in the deal, it may be a signal to stay clear.

Mr. Patricof said he invested in all of the firm’s deals that all involve athletes. “We have 85 athletes, and a third of them come into every deal,” he said.

Mason Plumlee, a basketball player for the Detroit Pistons who invested in Cholula, said he promoted the hot sauce in the locker room and on his social media platforms. He has also talked up TopGolf.

“I’ve taken all my buddies out to the TopGolf,” Mr. Plumlee said. “I would put it out on social media that I’m going out to TopGolf, this is my score.” He said he promoted only products he actually used and enjoyed.

Mr. Patricof said his athletes could do only so much, particularly in high-profile deals. “The flaw is our allocations are still relatively small,” he said. “I had $25 million worth of demand in Space X, but I got a third of that, so I have leverage up to a point.”

Dr. Ribakove said his eyes were wide open. The club structure allows him to decide whether to participate in specific ventures, unlike a private equity fund, which would put some portion of his money into every deal the fund selected.

“I like to be able to make choices on my own and educate myself and be educated by others before I make a decision,” Dr. Ribakove said.